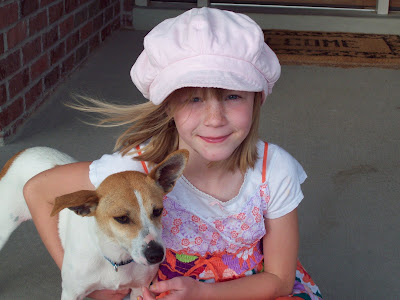 This is the latest addition to the family, Copper. Isn't he a sweetheart? He even has freckles just like Mimi!

On the way to get Copper, Mimi asked, "Does Copper still have his ball?"

I started laughing and she repeated herself. Ali was in the car and she said, "What is she asking?"

"No, really, Mom. Does he have his ball under him?" I'm laughing hysterically at this point and it totally reminds me of my cousin's story when my husband had to explain the difference between boys and girls to her little son. You can read about that in my comments from Mom to Elijah in June 2nd's entry "The Birds and the Bees and the Flowers and the Trees."

"Does she mean balls?" Ali asks in disgust, in which Mimi quickly says, "Ew." I guess she didn't know what she was asking. Maturation class isn't for another year and a half! She'll be in 4th grade at the start of school in the fall and that seems to be the crossing over of sweet and innocent to ....... wait! What happened?

He has a sweet little face and has taken to Mimi and even softened the heart (slightly) of her dog hating big sister. The owners only had him since November and had another Rat Terrier, too. Copper disappeared for about four weeks in which they thought he was gone forever and got a puppy to replace him. The puppy (Golden Retriever) and the other dog get along like peas in a pod and when Copper was returned (because he has a microchip) they had to give one up. Copper needed to be an only child - I mean dog - and so he was meant to be ours. I can't wait to see how well he gets along with the hamster! Mimi will spoil this dog to pieces and he will be well loved and I'm sure he'll love her back like only a dog can. Minus the bad habits of dogs with a ball.
Posted by Krista at 8:15 PM

Awwwwwww... he's perfect! If my math is correct he must be about 10 months old. You want to be certain that he has a chew toy of his own, and that you scold him if he ever tries to chew anything other than "his" toy. He looks adorable.
Don't forget to have that registered microchip number changed to reflect your information in the database.

So cute!! Life with dogs sent us over!! Have fun with your new pooch and congrats on your award!!

Hi, nice to meet you. I'm here to congratulate you on your Golden Hydrant award. I am a follower of Life with Dogs and see that you are a worthy recipient of this coveted award. ;0=)

I can see at a glance there is fun to be had at your house and now a new dog to enjoy it all too! Copper is a cutie and the little 2 legger holdin' him is quite a looker herself.

He's adorable. Wait- they are BOTH adorable!!!