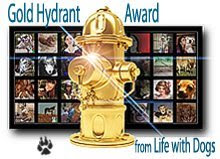 I'm so excited to see you if I could I would jump all over you! Thanks for the coveted Golden Hydrant Award. I will be sure to leave my scent marking on it and send it back! Since a lot of you will be from "Life With Dogs" and love our canine friends I will tell you about my little experience last night which has still left me traumatized!
Copper is new to our family (two weeks now) and we haven't owned a dog in our 20 years of marriage. If you click on that link you will see him and his new best friend, Mimi. No, Mimi is not a cat. She is a nine year old homosapien. If you don't know what a homosapien is, you might be surprised, because she is a very special breed.

Copper has a girlfriend. I knew from his previous owners that it was a pink volleyball. I chose to leave her behind and hoping Copper would forget her quickly and adapt to abstinence. He found a beautiful lime green volleyball to replace her. I don't know where this ball came from, so it must have been fate.

I was in my bedroom when my cell phone rang. I had to open my bedroom door to get it and as soon as my door was opened my eyes and mind were tainted forever. It was Copper and his girlfriend showing public displays of affection. The funny thing was the look on his face. He looked totally guilty. I said in my most disappointed/disgusted voice, "COPPER!" Off he came. "That ball needs to stay outside!" I really don't know how it made it's way inside. Catching Copper in the act is something I don't want to do again.

So this morning he left a gift on the carpet. I actually considered photographing it and posting it, but even Life With Dogs doesn't do that. It would be bad taste, I know. I don't know if this was just regression from adjusting to a new family or in protest of catching him in the act. Any advice for new dog owners on helping dogs find a new hobby? At least he hasn't resorted to legs! ;-)
Posted by Krista at 11:41 AM

Shudder. I do hate that dogs do that. Why oh why?! And volleyballs. They must make good substitute pals (or well, you know "girlfriends"). Remember Cast Away and how devestating when Wilson floated away?? I cried . . . but I wouldn't cry if disturbingly used green volleyball floated away.

About the ball, I'd find a nice place for it in the garbage zone.

He is a cute pup!

Bwahahaha! Has Copper been neutered? That may be step number one. It should be, if he still has his boy parts.

Count yourself lucky on the leg thing. I have to say I'd be the last person on the planet who should give dog training advice. Too much of a pushover. :)

I was excited to see the Gold Hydrant award!

Toss the green ball, and if he not neutered, DO IT!

Otherwise, just stay strong and tell him NO everytime you catch him...lol.

Unfortunately, dogs cannot say, "I am displeased over _______." They can only show their displeasure by either physical aggression, or a less painful physical gesture... such as a "gift" in the middle of the carpet. They have been known - if they are seriously upset with you - to leave such gifts upon your sleeping place. Cats will do the same thing. Animals are neither particularly sentient beings, nor are they human beings. Some dogs are quicker to learn from trial-and-error than others. Some learn best (the 'tarded ones)from an experienced dog trainer, and some just never quite catch on. As for the other problem, boy dogs are like that. And as far as your neutering Copper goes, it would probably be best to have it done by a veterinarian, rather than doing it yourself with those pinking shears. Let Copper resent somebody he may only see once a year. Unless they are severely mistreated, or unless a desired behavior is significantly and frequently reinforced, a dog's long-term memory only lasts about 48 hours... but a dog's love is forever.

ok.....as mimi said....did he bring his "ball" with him? If he did....it is time he gets rid of that and then he can keep the green volley ball...as far as pottie training......our cuz Chris is and EXPERT.....she will tell you EVERYTHING you need to know about that. I have NEVER seen any of her dogs go in the house....call her!!!

LOL! I need to meet this new family member.

Congratulations on the award.