Sorry....I got so busy the last couple of days I didn't even wish everyone a Merry Christmas like I planned (except everyone that got cards, form letters and talked to us.)

On Christmas Eve, as I was backing out of the driveway, I noticed this strange wicker chair just in the alcove of our front doorway. I thought, What is that chair doing near the front door? So I called from my cell phone and asked the family if they knew anything about it. No one did. "JON AND ANNIE!!!" Nothing like catching us off guard at Christmas time for a nice practical joke. I will be returning the chair after I paint it bright pink. It will go well with the flamingos I left them last year! (Or was that the year I did Memorial Day wreaths?) What kind of nice Christmas décor can I pick up for 90% off?

We always get together with my step-family for Christmas Eve dinner for Italian food with recipes have been passed down from generation to generation. Most of my friends know I don't do pasta. It's not that I don't like it......it doesn't like me. There was fish and plenty of other food. Jared had to make my traditional "English toffee" this year due to my hand problem.

Littlest Pet Shop kept Mimi occupied for the rest of the day! The rest of us were like zombies opening our gifts because it was almost 9:00 AM, afterall. We had a fun day that ended with my brother and his family and my mom and stepdad over for dinner. It was a very white Christmas with a blizzard that left the roads snow packed for shopping today!

Labels: family, friends, fun, holidays, It's all about Mimi

Ali loved Barbies. I described her bedroom once as "Barbie Hell." My Mimi breaks my heart because she doesn't have the same love. She likes "Littlest Pet Shop" stuff. Time to file the Barbie chapter away in my life. It's going to be painful. All the beautiful clothes, shoes and accessories!

Seth loved Legos. We invested a small fortune in Legos. He loved the pirates and the knights and so did I. You may think it would be his father that would be the one to love putting them together, seeing as he's an engineer and all. Nope. It was me who loved reading the instructions and putting all the castles and ships together. I was sad when Seth was too old for the Safari Legos when they came out. I packed up the Legos a long time ago - but we're saving them because I'm sure they will appreciate in value.

Littlest Pet Shop. No clothes, shoes and accessories. Just a tiny dog bowl and fake dog doo doo. Yep. One of the little dogs has a fake feces. Nothing like pretending to clean up puppy poop. They obviously didn't design these things with moms in mind. By the time they're old enough to own toys that tiny - you're sick of poop!
Posted by Krista at 6:46 PM 6 comments:

Labels: Ali, holidays, It's all about Mimi, Seth

The Big Video In the Sky

When I started this blog it was a creative outlet for me to share my sense of humor and my observations of this crazy life. A few times I got off track and went a little deep. Not that it is unusual for a blonde to have deep thoughts, it happens occasionally. Is it a coincidence that the weather is awful and I feel like spewing a thousand swear words covered in poison? That would be totally out of character for me and probably wouldn't make me feel any better. But I'll share a few more deep thoughts until I go back and read this in a week and ask, "What was I thinking?" and then delete it.

Have you ever done anything so bad, you feel like you may as well be naked in front of a crowd? That nothing short of self-flagellation with a cat-of nine-tails will make you feel better? You probably haven't because most of my friends are really righteous and have no reason to feel that level of guilt.

Have you ever done anything so stupid that while logic was screaming at you, you thought you knew better? And then you were left looking like a fool? Probably not.

So what do you think about the "big video in the sky?" Some people believe everything you ever did in your life will be flashed before your eyes at judgement, good and bad. I don't believe that. In the Doctrine and Covenants 58:42 it says, "Behold, he who has repented of his sins, the same is forgiven, and I , the Lord, remember them no more." Maybe that's just wishful thinking on my part. When you think about all the things that humans have forgiven for, even the worst sin of murder, why would we doubt the Lord would forgive us? Maybe because self-flagellating feels better and we feel we have paid some sort of penance.

Some people have noticed I've lost a few pounds. They are asking me what my secret is. I had a motivator to begin with which was I really wanted to get healthy. I hope I have quite a few more years left with this body, so I need to take care of it. So it started with walking and weight training. Then I needed this boost: (Remember - safe and easy to swallow!) You may have to click on the picture to enlarge it. 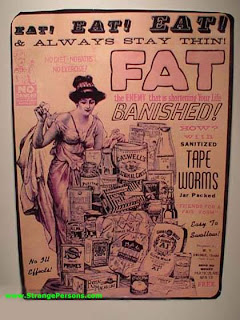 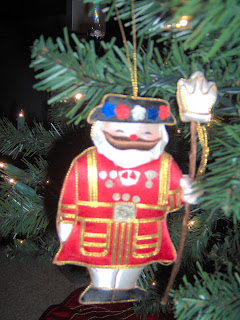 My friend, Christina, tagged me several days ago and I'm finally getting around to doing it! I really don't have one favorite ornament, but this is one that I bought in England when I was on a mission. It reminds me of very cold times when we wore nylons, leggins and leg warmers to keep warm. This particular ornament I bought at Harrod's. How we ever found our way out of that place, I'll never know! Anyone who's been there knows what I'm talking about!

There are many ornaments that remind me of great times, some I've had since I was a kid, one my best friend when I was 14 gave me, some the kids have made. I used to think all the ornaments should have a theme and look like the ones in the department stores. That is the artist in me, but now I like it however Mimi likes to decorate it! She's the only one who would do any decorating. It's nice still having someone little to keep us in the spirit of Christmas, the magic of Santa and the excitement of traditions.

Don't pass out. This is the first family photo we've had taken in seven - that's 7 years!!! Since Mimi was one years old. It's my fault, because I really hate getting my picture taken because I always look goofy. So here we are, looking like the perfect little family, no troubles at all, no naughty teenagers, no whining eight year old, no grumpy parents. Brady Bear had to be in the picture, too, she is very much part of our family. I actually have no idea who those children are, they had some models standing by and we left our kids at home. We thought they would look cute with us. 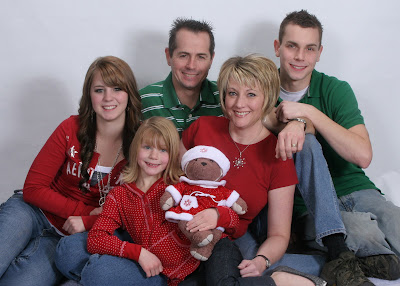 'Tis the season to go crazy...fa la la la la, la la la la. I've seen it first hand. I was at Mervyns the other day and this little boy, who was about three, had a major mental meltdown. He had had enough and was making a big scene sobbing very loudly. A few people looked at him and smiled - except one little girl who stood there in amazement, like she was watching a freak show. He looked at her and through his sobs he shouts, "GO AWAY....(gasp)....PRETTY DRESSER!"

Then there is Mimi. The night I brought up the Christmas decor from the basement she had an absolute meltdown until I finally said, "We'll leave all this out and you can decorate tomorrow when you're not so tired." "I'M NOT TIRED!!!" she screams as she's crying.

Then yesterday as she was complaining about everything, including the molecules that surrounded her, she finally says in frustration, "AND - I didn't get any cuddles today!" I said, "Yes you did. I gave you some cuddles today." She says in her same frustration, "Yeah, but only about five or six!" I said, "Do you need more?" She puts down her guard and says, "Uh-huh." That was one problem easily solved. I wish they were all that easy.

Up. Down. Up. Down. Happy. Sad. Love. Hate. Laughter. Tears. What happened to September, when the weather was perfect, the kids were back to school and all was well? How many shopping days until Christmas?! ONE!!! I'll be at the mall on Christmas Eve getting everything in one trip! So if you're feeling a little bi-polar, join the club.
Posted by Krista at 8:21 PM 3 comments:

My gorgeous friend, Janine, wrote a very nice blog about me and my husband. http://jamean.blogspot.com/2008/11/for-krista-jared-and-tommy.html It gave me an idea! I'm going to say some nice things about her and one other person and those people must do the same. Say something nice about the person who tagged you and tag someone else. Here goes:

Janine
I worked with Janine testing kids with English as a second language. She is fun and bubbly and we had soooo much fun together. She is a gorgeous, single mom, but recently engaged. She loves her kids and is such a good mom. She is beautiful and laughs at my jokes, which puts her high on my list. One word for her....PLANT!!! Okay, that's 32 words with fresh lip gloss!

My BFF, Karen
I cannot say enough about Karen. She is an angel here on earth. She is like a sister and we talk almost every day. She waited for quite a few years before her children came to her and the Rocket Scientist. They adopted four mischievious - I mean beautiful children and she has more patience in her little finger than I have in my whole body. I love her and her family and if you don't have her for a friend, I'm sorry. You're missing out. We have a "cheese and wine" relationship. When one of us whines, the other says, "Cheez." Thanks for never running out of cheese!

I wish I could go on and on about everyone, and if you really want me to, let me know and I'll do my next post on you!
Posted by Krista at 8:14 PM 2 comments: