Getting Back to "Normal"

I'm waiting for my life to get back to normal. I've had another absence again, but with good reason. My dear step dad passed away on September 17th. Art has been my step dad for 25 years. Even when a person is considered elderly, even when their health is failing, I still don't think you are ready for it. He was "terrible good" until the end. 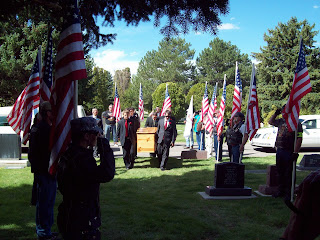 The Patriot Guard Riders escorted us to the cemetery on their motorcycles and saluted Art, an army veteran and a Harley Davidson rider when he could ride. They made a path to his final resting place, while his grandsons carried him in the casket he made himself.

There's a lot of deep thinking when someone close to you passes away. It's as if everything has paused for you but life is still running in fast motion for everyone else. You contemplate what is really important and realize there are many things that force you to lose focus on them - like work, school, and fatigue.
I've been thinking a lot about these things. Not the fatigue part but the work and school part. This posting has been so serious - not like me. I'm trying to get back to normal. These things help me: 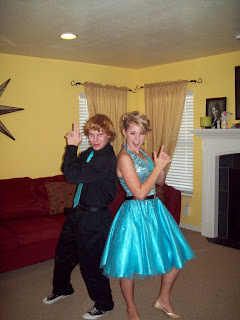 This is Ali with her friend Rob before their Homecoming Dance. 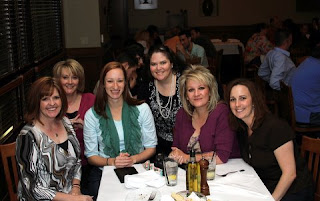 This is me and Holly in the back, KyAnn, Jackie, Lisa and Shauna in the front. We had a Girls' Night Out and ate at an Italian restaurant and talked about blogging. It was nice to get out and laugh with some of the funniest and nicest "girls" on the planet.
Okay, now that I got you caught up, I can't leave you without a funny story. I was shopping in my second home, aka Wal-Mart, when an elderly lady asks me if I knew the store very well. I know the store better than I should and she asked me where the tampons and Kotex would be. I told her they were on the other side of the pharmacy on the right. She turns to her husband and says, "See Harold. I was close but no cigar." Don't worry, I didn't laugh out loud.
Posted by Krista at 9:44 PM 15 comments:

Bloggin' BFFs and a Bathroom Story

A couple of weeks ago, I had the opportunity to meet a good friend of mine. Yeah, she is my good friend but we had never actually met! We went to lunch had a great time eating salads, talking, laughing, laughing some more, and we even had cheesecake under peer pressure. You know, "I'll have a piece if you do," and "I'll have a piece if you don't tell anyone I ate the whole thing by myself and licked my plate in public." 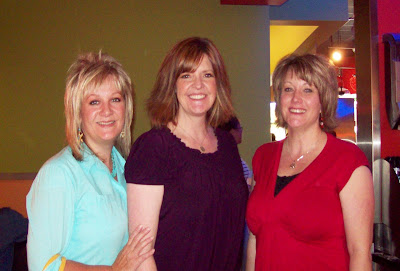 This is Lisa from Blue and Shoe, KyAnn from Checketts-Myers Clan and this is a rare photo of me. You know how much I love to get my photo taken. Lisa and KyAnn, you may notice a little Photoshop enhancement, erasing of any food particles still left on our face, removal of double chins and I gave myself a breast augmentation. Eh hem. There's only so much you can do in Photoshop when you start with a picture from a cheap camera with bad restaurant lighting.

I missed the other "Blog Friends" get together that KyAnn got to go to because I go to school on Thursday nights. I'm considering changing my night to Monday night. It seems I am missing a lot of things on Thursdays. I cried on Sunday because I'm missing Mimi's "Back-to-School" Fashion Show with the church activity days for girls age 8-11.

On another note, we had an emergency here tonight. For friends on Facebook who watched the drama unfold, you know I can't pass up a good toilet story. I will spare you the photos for this one......and I actually spared myself. There are no photos. It was almost as bad as this time.

Ali came upstairs and complained that the toilet was clogged in the basement. Jared went down and checked it out. He then proceeded to yell at Seth who I guess didn't feel like doing anything about it. I was upstairs in my room listening to the yelling that went on for about ten minutes. I found it a little humorous that they were having such a huge fight over a clogged toilet. We all know, Dr. Phil, that it's not about the clogged toilet. It's about the owner of the "problem" that won't accept responsibility. It's about adding more fiber to some one's food.

Then Ali tells me it's been like that since Sunday. That is wrong on so many levels. But I thought it was kind of funny. So my husband had to run to the hardware store to buy a "power plunger." This was one stubborn obstruction. Jared said he was going to go back to the hardware store to buy a snake. Mimi thought she was going to get a new pet. I downloaded a video so you can learn to use a Plumber's Snake, not a Toilet Snake like I was calling it. The toilet snake may be part of the problem. I was hoping to see more action in this video. I'm thinking when Jared uses the toilet snake I better get it on video. Maybe I'll even have a go with this little beauty!

Anyway, you can call off the exorcism now. Satan has fallen out of someone's bottom.
Posted by Krista at 10:07 PM 15 comments: 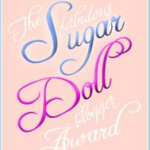 My sweet friend Holly at Diamond Potential gave me this sweeeet award. I accept it most humbly and graciously. I met Holly at CBC and it was great to meet her and develop a new friend. With this award you must:
1. Thank the person that gave you the award.
2. Share 10 things about yourself.
3. Pass this award to 10 bloggers you have recently discovered and think are fantastic.
4. Contact the bloggers and let them know you picked them for the award.
So here is ten useless pieces of information about me that you could care less about!
1. My favorite song at the moment is "If We Ever Meet Again" by Timbaland and Katy Perry.

2. I am an artist and I believe in the psychology of color. I believe in surrounding yourself and wearing colors that make you happy. If you feel a little blue, wear a color that you love, that you get a million compliments in, that you feel beautiful in. I decorate my house in bright colors and go against the popular taupe and brown decor. I think your house should reflect who you are and if you are like everyone else then......go for it.

3. My favorite color is PINK. There's not enough of pink in this world.

4. I love to entertain. We have a New Year's Party every year (you're invited - it's open invitation) and try to do a "How to Host a Murder" at least once a year. Many spontaneous game nights and dinners out. I also like to be invited to other people's houses so I don't have to clean mine!

5. I like to put on foreign accents. I especially like to put on accents when I'm going through drive-thru restaurants. I know it's demented, but I find humor in putting on a heavy Asian or Hispanic accent to see this innocent, professional looking, matronly woman paying for my "bee-skeet" (that would be a Carl's Jr. biscuit) with my coworker in the car. Blink, blink. And BTW McDonald's, don't forget my Madam Alexander toy or I will be back. You know how important they are to the kids. Blink, blink.

6. I used to be like Martha Stewart. I can cook or sew or make just about anything. But why? I'm more like Betty Crocker now, open the box, add eggs and bake. Hopefully the eggs haven't been in the fridge for six months.

7. I have a few foreign habits. I lived in England for 18 months where I had to adapt to eating with my fork in my left hand and knife in my right hand. I lived in Australia for seven years where I learned that "damn" and "hell" aren't swear words - even in church (which is also the case in England). Having an Australian husband for 21 years seals the deal - you're going to hear those words at our house. But you won't hear the word "bloody" used as a swear word, because it is cursing the blood of Christ. Now that you know, you have to quit saying it.

8. I'm really insecure. Should I have told you that? I try not to re-read my stuff to much or it would never get posted. I hate having my photo taken. I worry that people think I'm fat, ugly, unintelligent, weird or not righteous enough because I say "damn" and "hell".

9. I can belch like a teenage boy. Goodbye dear readers. It was nice knowing you. Don't worry, I save that for my immediate family and my children's dates. Who needs a gun collection? Should I have told you that?

10. It has taken me two months to compile this list. Holly probably forgot she passed this on by now. No - I just can't think of ten things to say about myself. Hmmmm. I just made that belching thing up. I like singing and have fun singing karaoke with friends and Ali. It's awesome therapy.

I'm breaking the rules because it will take me another two months to pick 10 bloggers and contact them. So......CONSIDER YOURSELF AWARDED!