The Bull That Started It

Cheeseboy, you may want to skip this one. Your wife, however, may enjoy this.

Saturday night Mimi said, "Mom, I saw a commercial on TV and there was this bull thing that you ride with a diaper thing on it. But it wasn't a diaper. What was that thing?"

I tried to play dumb. "What? Like a saddle?"

"No. It was white and it was shaped like it would go on your underwear. Like it would fit between your legs. Do you know what that is?"

"Oh. Yeah. That's something that you use when you are a teenager."

"Well, I saw some at Laurie's house."

"Her teenage sisters probably use them."

"It's not something I can't tell you about in just a couple of minutes. We'll have a talk about it tomorrow after church," I'm thinking she'll forget about it by then.

Here's the commercial that caused the premature maturation conversation:

As soon as church was over she threw herself on the couch next to me. "Remember we were going to have that talk?"

So, this is my baby girl, she is only ten years old. She still sleeps with a teddy bear and wants to sit on your lap. She doesn't like boys yet and still likes dolls. Maturation Class isn't until the end of 5th grade. We are not ready for this.

"Those white things are called pads. Usually girls use them when they're teenagers or almost teenagers. You know how ladies are the only ones to have babies?"

"Well, inside our bodies is this little nest kind of thing and then the baby comes out of this tube. The nest is about the size of your fist and it's right above your bone right here." I drew her a cartoon of a lady with a cartoon reproductive system. "There's eggs in these little egg sacks and every month they take turns sending an egg to the nest. Our body gets ready to have a baby and if we don't have a baby, then our body has to get rid of the egg. So this stuff comes out of the tube every month for about 3-5 days and it's called a period. It's kind of like bloody snot. That's what we use those pads for."

She was very attentive, it wasn't too medical, I didn't giggle once and I don't think I freaked her out. She was so cute and smiling as we talked and I drew pictures. Thank goodness she didn't ask how the baby got in there.

"So why was there one on that bull?" That's what I want to know.

Labels: bathroom humor, It's all about Mimi, Oh my heck, parenting

So, I told you about my sucky letter that I got on Saturday. I was a bit emotional about that on the weekend but I'm good now. Just had to get it out of my system. I'm still a little bitter. I could spew out some sarcasm, I'm sure.

Saturday, as I sat at my desk and cried, my wonderful 17 year old daughter Ali walked in and asked me what was wrong. I told her I didn't even get an interview for the position at her school that I really wanted. I had told her about it before and she thought it would be cool if I got a job at her school. I told her they probably had someone in mind for the job already.

My precious daughter put her arms around me and said, "It's okay, Mom. In theater we learn that sometimes people are already picked out for parts. And even when you do your best and you try out for a part and you don't get it, it doesn't mean you weren't good enough. It just means the part was already given to someone else. There's nothing you could have done to change it. You're still a good actor and there will be other parts."

Really? Is she mine? How did I get a daughter so wonderful? My 19 year old son, Seth, came in and hugged me and said, "I love you, Mom." Mimi just came in and hugged me. My husband of course, said everything right and encouraged me. The dog reminded me that there was still ball to play and sometimes it gets stuck under the couch and you need someone to get it for you. There's a deep analogy there for you. My true friends have dived under the couch for me this week.

I'm feeling the pressure of improving my skills so I am not at the bottom of the totem pole but schooling is really taking a big bite out of my time. I love studying graphic design but it sure is hard having much energy for anything much after that. So I'm trying to decide if I need to cut to one day a week of school or what. That was another reason I was looking forward to having summers off, so I could fill in some more time with school. Well, I'll keep reading my fortune cookies and see what life has in store for me. Any advice?
Posted by Krista at 9:12 PM 16 comments:

Today I got a rejection letter. It really sucks. I applied for a job that I thought I would be really good at. It would have been a secretarial position for a liaison between the community college (that I just so happen to attend as a student already) and our high school, that my daughter attends. It was open to school district employees only. I didn't even get an interview. I'm sure the job was handed on a platter to some one that they already had picked out, which is the way things work. I've been a volunteer and an employee with our school district long enough to know these things. By law they have to open the position for interviews. At least I didn't have to waste my vacation time interviewing for a position that wasn't really available.

I can remember my Mission President waving his pointing finger, and saying in his high pitched, aged voice, "Elders and Sisters, it's not what you know, it's who you know."

I don't know why I'm so upset about it knowing the way things work, except that I was dreaming about having summers off, planning my liposuction next summer, recuperating in Cabo San Lucas with virgin Pina Coladas.
Posted by Krista at 2:47 PM 11 comments:

I Got Trump Fever

You know, even as a teenager I've never been one to get star struck. I think I was more star struck by the uber popular kids at school. I think I still get more star struck when the Bishop at my church says hello to me. Maybe that's just guilt. Once again, clearing the phlegm from my ever clogged throat.

So maybe that's why I don't get why girls go crazy over Justin Beiber. He sings like a girl. Like a girl singing about girls. I remember the first time I heard "She's Out of My Life" by Michael Jackson when I was in eighth grade and the song left me confused why a woman would be sad that another woman would be out of her life. That's before gay people were invented (in my world, anyway) and now it would make total sense. But it really bugged me back then. Kind of like trying to understand negative numbers and infinity and beyond now. Don't think about it, don't think about it. It kind of bugs me that he's from Canada and he speaks like he's been born and raised in the trailer parks of Mississippi. Canada - be offended! Tell him to speak properly and stop trying to talk like a Yankee hick subculture!

Then there is the hair that reminded me of someone who is much, much older.

So I decided to do a little makeover with my newly found Photoshop skills. Who would have known that The Donald was so incredibly handsome? I'm totally seeing it now. And I haven't even seen his credit cards! So, what do you think? Trump Fever? I think Justin should be fired. We should wait a couple of years until his voice cracks and then judge his singing. Too girly for now. I guess that's not a problem when you're twelve. 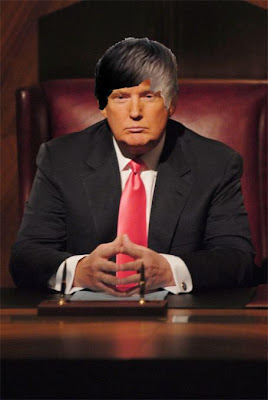 This blog is supposed to be my humorous blog, right? Where my motto is "finding humor in everyday life." Notice a brief absence? No.....not the absence of my briefs.....eh hem. I don't know if I ever mentioned in my blog that I suffer with headaches. I try not to whine. This is almost a daily occurrence and it really sucks. So how can I find humor in the fact that my head feels like it is hanging on by a tendon at times? Where is the humor in the back of my head splitting open and an alien creature crawling out? Okay - that is funny stuff!

So, I've been trying to get a handle on these things that I have adapted to as everyday life and can fake my way through it pretty good. It's usually when I mention something about a meat hook that gives it away that I'm feeling pretty crappy. But I can still make a joke. Can someone just pick my head up and place it back on my shoulders?

I usually start the day out with Excedrin. Sometimes it works, sometimes it doesn't. If it doesn't, I wait until lunch time and I take half of a 10 mg. Lortab, which is 5mg. with less acetaminophen than taking a 5 mg. Lortab. I've been to chiropractors, physical therapists, I have a deep tissue massage once a week at the moment.

Lately, I've been seeing a neurologist. He's put me on this drug called Topamax. I was really excited to find out that one of the side effects was weight loss. Woo freakin' hoo! I didn't know he was talking about the weight of my head when everyone thinks I've lost it. Scatterbrainedness is one of the symptoms. I think it was worded something like concentration/attention and something about recall. No one has noticed any difference.

Taste change is another side effect. Which explains why my long term relationship with Diet Coke has ended. I just can't stand the taste of the artificial sweeteners. I meant to give that up anyway. It was a toxic relationship. But all of a sudden I can't stand the smell of my desk drawer at work, either.

Then there is the fatigue and feeling lethargic, tiredness, drowsiness, do not operate heavy machinery-ness, mood changes, depression, suicidal thoughts. So, I'm feeling really suicidal but I'm too tired to carry it out.

And one of the last side effects of Topamax is headaches. So, how am I supposed to know if I'm getting headaches from the Topamax?
Posted by Krista at 1:04 PM 22 comments: