So here I was, with my family in the country, playing with my favorite stick. I saw a van pull up and a very hot lady human and a girl human got out. I decided to say hi. "Hello! Hello!" I jumped up so they could to pat my head better. "Where's my stick?" I ran and got it and handed it to the new humans so they could throw it for me. Surely, they won't be sick of throwing it. They were talking to my family and kept looking at me. My roommates kept going over to see them but I got the most pats. Naa, naa, nanny, naa. Then they left.

A couple of sleeps later and here were those new humans again. They pet me and talked to me. I have no idea what they were saying but it sounded friendly. Hey! The van door is opened - I wonder what's in there. The little human kept calling my name. There's nothing too exciting in the van but we're going for a ride - that's fun. Weeeeee!

I like that little human. "Mimi" is her name. She tastes really good and I even tasted the inside of her mouth. I don't think she liked that. Mimi took me on a walk and kept throwing my stick for me. I like that. Then I played with my new ball. It didn't quite fit in my mouth so I pushed it along the floor until I could pick it up with my teeth. I got some treats, too.


Inside of her house I can run a circle and then another circle. I think they call that a figure eight. They even had a dish with food and water. They are so kind. When am I going home? Grrrr, that itches. So I licked my legs and my belly because it feels a little better with spit on it. Doesn't taste as good as the inside of Mimi's mouth, though. Or as good as treats.

I spent the night and slept in Mimi's bed. I like being under the covers so I use my nose to lift them and then I crawl all the way under and turn around to poke my head out. I tasted her face again. Yep. Still delicious. Makes me want a treat.

I woke up and had to potty. Mimi let me out and she threw the ball to me. We played fetch and more fetch. I like running after things and seeing how many times people will throw things to me. I also found a new girlfriend. She's a hot little lime green volleyball. I got in trouble for PDA inside the house. I really liked her and kept looking at her and the grown ups said she has to stay outside. I have another ball that's a beach ball and I like to keep it up in the air and not let it touch the ground. Sometimes the furniture gets in the way.

Then come the treats. Mmmm! Treats! Dang! I hate doin' the ballerina dance, it's for wusses. Mmmm! Treats! I don't wanna sit down, the floor's cold. Mmmm! Treats! What if I lie down, roll over, army crawl and bark all at once before you even ask me to? Just gimme the freakin' treat! 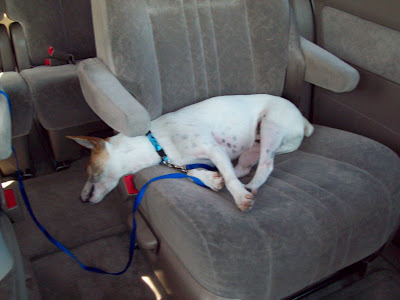 We went for a ride and a grown up took my picture while I had the one and only nap all day. Mimi would make a Jack Russell proud - she has so much energy. I wonder if she gets treats.
Posted by Krista at 7:29 PM

Copper's story reminds me of a novel I read several years ago - where the entire story was told from the dog's point of view. It was masterfully done, and - if I recall correctly - was a Dean Koontz novel, the name of which escapes me at the moment (since I have only thought of it once in the past 15 years).

Then all these strange people came in and started petting me. I ran around and around to see if I could confuse them, but they sat on the couch and stayed. They even got treats for staying! They must be good pets too!

Copper is a very cute dog! Mimi is lucky!

You know me....always running late, but you bet I am excited at this news!! Now you just need one or two more to keep the banter at a deafening level, just ask me what it's like. ;)

You need to write a novel!! JR