Remember the story about the horrific public toilet that I had to use? Well, I didn't have to look much further than our children's loo. This one is Mimi's after she bathed the dog. Why are there three towels on the floor for one little dog I ask? There's a plastic box that she used as a bucket to gently rinse him. 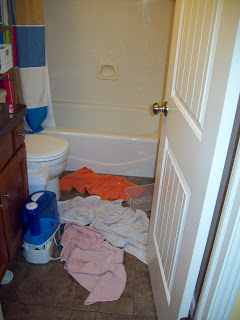 Now there is no excuse for washing dogs in this bathroom. This is my two teenagers' bathroom. It's in the basement which is still under construction - notice the floor isn't finished being tiled? I'm actually standing in the toilet room where their shower is. So this is just the sink/mirror area they use to beautify themselves. I just don't get it. I don't do their laundry, so I'm sure they run out of clothes eventually and have to pick them up off the floor. I should mention most of the clothes belong to my son. The bathroom is between their bedrooms, so I don't know why it's so hard to carry them to their room and put them in their own personal dirty clothes baskets. I guess one toilet overflow and they might learn. Hmmm. I feel an April Fool's joke coming on. Fake doggie doo is seeming really funny at the moment. I'll let you know how it goes. 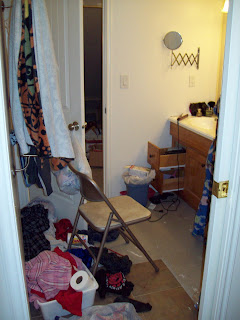 Well, after viewing these bathrooms, I'm thinking next time my own loo is occupied, I may just go to the neighbors rather than use the kids' bathroom. I'd have to hover there and I could just possibly get hurt.
Posted by Krista at 5:00 AM

Adolescents are mentally incompetent. For some reason the act of putting things in their proper place escapes them. (Unfortunately most men never totally figure that one out.) My daughters are moms now and it shocks me sometimes to see how well the care for their homes and family when I remember how they DIDN'T care for their rooms and bath.

Yeah, I can see a great post coming from a well executed April Fools prank.

I have to go into a "zone" before I go upstairs into my children's domain. Either I do that, or I begin screaming before my foot hits the first stair. And then I feel joyful and kind for the rest of the day when I look into their slothful, fat, lazy faces. Good time mothering.

Oh my gosh, so glad I'm not the only one. But you're not giving me much hope for the future :) My kids' bathroom is DISGUSTING all the dang time. It's upstairs so I rarely go in there, but when I do, I think, "I really should clean this." And then I walk back downstairs thinking, "Don't go in there again." See cuz I'm lazy and I don't want to clean it. Bathrooms. Gross.

Happy to say, I don't have that problem here! My boys bathroom downstairs is just as clean as the ones upstairs. I am very proud of them! Don't ask me how I did it. I'm just very appreciative of them keeping theirs clean, and my daughter for keeping hers clean! Their bedrooms on the other hand....

As the mother of three young boys I live in fear of their bathroom. I don't even like to walk past it.

Those bathroom pictures looks familiar.....oh yea, they look like MY kids bathroom! I have 5 kids/teenagers/ tweens sharing one bathroom. They are so gross. My 15 year old daughter often protests and uses mine.

I thought that was the way bathrooms were supposed to look. To a teenager anyway! Give up they will all leave home soon and it will always be clean.