This is "Oh my heck Wednesday", right? You know the Pavlov and the salivating dog story, right? How Pavlov would ring a bell and the tester dog would salivate. Dogs don't usually salivate when they hear a bell, but because food would be provided when the bell would ring controlled stimulus brought uncontrolled responses.

I feel the need to share a funny childhood story. I was almost ten years old and my brother, Gene, was about six years old when we went to our grandparents' house in Virginia one Christmas. They owned this chihuahua named Coco. Gene was sitting on the floor, legs stretched out with his arms supporting him from behind when Coco decided to get a little excited on his arm. Yep, humping his arm. Gene laughed and laughed and shouts, "Grandma, LOOK! Coco's doin' an Indian dance!" My Gran shoos the dog and I remember her saying, "Get that nasty thang off there!"

A couple of weeks ago our dog, Copper was standing there and he looked strange. He looked as if he had done something wrong or he was in pain or something. I asked Mimi, "What's wrong with Copper?" She looked him over and said, "Oh. I know. He has a red thing sticking out of his weenie and he's embarassed."

I know I've mentioned Copper's girlfriend. His girlfriend is a lime green volleyball that I have no idea where it came from. Mimi asks me last week, "Why does Copper make his back go up and down, and up and down on that ball?" Here's my pathetic, wimp-out answer: "I think he's trying to make babies with the ball." My sweet tender-heart says as empathetically as she can, "Aw. How cute. Copper wants to be a daddy." C'mon, I wasn't ready to have "the talk" yet. We're still recuperating from Santa Claus and Easter Bunny!

Back to Pavlov and the dog. Somehow, this stupid ball finds it's way back inside my house. The other day, there it was and I kicked it toward the back door and called Copper, so he could go outside with it. I'm sensitive to the fact that a neutered dog still has needs, but not in the house. So I called him and he just stood there. I called him again and he just looked at me. "OH NO! No. No. No." I'm thinking. Well, like Pavlov's dog and his bell is Copper to his ball. He couldn't even walk. I'm sorry if I offend you with this picture, but it was too funny not to share. You can catch a glimpse of his girlfriend behind him. 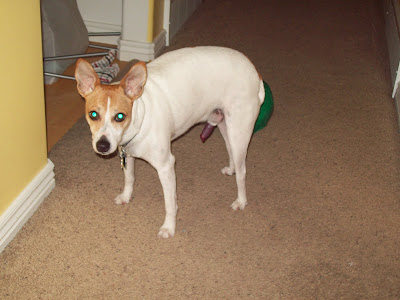 I'm sorry. I couldn't resist. I hope no one is offended by dog woodies. It was just too sick to not share.
Posted by Krista at 12:00 AM

Ha,ha,ha,!! That is hilarious, and I'm so not offended. I have plenty of stories to go along with all the pets in our house. Trust me, I would have shared too!!

Thanks for the laugh!

EWWWWWW!!!! HAHAHAHAHAHAHA!!! You know, sometimes it's good to not "know" all there is to know about the creatures on this earth. :)

Poor Copper. The vet didn't take all his hormones away if the sight of his volleyball girlfriend gives him a woodie. At least he has enough class to be embarrased.

So classic!! Just be glad you don't have a horse! Now THAT is unbelievable! Anyway.....movin' on...

Oh poor Cooper gets a pic of his junk spread all over the internet! I think you should get him a nice basketball to go with the volleyball.

It looks kind of like weinie and it made me laugh.

ROFL! Who the hell is offended by a little dog wood? Well, maybe that volley ball now that I think about it! :)

Please tell me you have seen the Punchie video. Please e-mail me if you have not!

We always referred to that as "Lipstick", as in, "Mom, Copper's lipstick is out again." You'll never look at lipstick the same again.

Listen, Copper... Any man who has ever watched beach volleyball can relate!

OH MY HECK! You're comments have made me laugh my head off and smile from ear to ear! I'm so glad I could make you laugh!