Yes They're Real and They're Fabulous!

We've had a bit of tragedy in my neighborhood and I don't know how faithful I'll be on my blog for this week. Some friends of ours 25 year old daughter took her own life Friday night and we're left in a somber mood. I'm reposting one of my favorites that I originally posted in Sept. '08.

Some people actually pay to have them! Not me! I like the more natural look. You can spot the fake ones from a mile away! People admire them whether they're real or fake as long as you show them off.


Both of my daughter's want some just like mine. My eight year old and 15 year old are already trying to grow them. I tell them to hold off until they're a little older and told my eight year old, Mimi, they look ridiculous on little girls. The kids at school are going to think she's a little different and what will her teacher think with her sporting them around?!


I guess Ali is old enough and they do come in handy at her age. Boys usually think they're attractive and even the girls like them. And can you believe even girls her age are getting fake ones? A lot of them are jealous when they see how pretty they are, but no matter how hard they try they can't grow any if their life depended on it. I still don't think they look very nice when they are fake and can't believe what some people will pay! And also how it's hard to find a certified professional or they may not look even.


I thought I would put a picture of them on my blog, just to prove to people they can look good natural, without modification. Ali didn't want hers posted all over the Internet, but Mimi and I are proud of ours au naturale!: 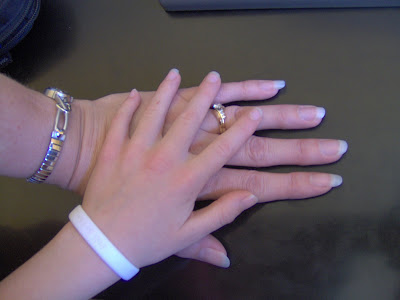 Labels: Ali, fun, It's all about Mimi, sick and wrong

Mine used to be fabulous! I used to take such good care of mine. I'd file them and paint them and keep them all pretty. And they were long and they were real! I got compliments on them ALL the time. I used to even tell my cousin that I thought my real ones were pretty enough that I could model.

Then I got married, and had kids. And I was always scratching the baby. And I started to hate the way they would click on the keyboard when I tried to type. And when you have 3 kids who has time to file and paint?

So now they are short all the time and seriously the last time I painted them was probably my wedding day. How sad is that?

So you have bossy nails looking glamorous? You are such a nut, that's why I love ya!

I love this posting! It's one of my favs!
I am truly sorry for the loss in your neighborhood. Not an easy thing to go through. I hope they understand it is not their fault. Give them a hug for me!

So sorry to hear about the sad news in your neighborhood. There are some hurts that not even a casserole can fix.

Love the post. Hilarious! Mine are short and chewed up.

By the way, I noticed you were listed as a follower on my blog TWICE! I know that means you love me twice as much as everyone else but I think it is against some kind of blogosphere rules. I won't tell you won't!

Fun Krista...fingernails...who knew?
I chewed on mine until about 10 years ago. then I rewarded myself with nails when I passed the Real estate test and never went back to chewing again.
I rarely forget an appointment either, that's pretty good for me!

Some people are just born with paper thins and bad nail biting genetics.

I remember having a french manicure one time and loving it. The next day, some of the nails were looking pretty bad. I went back to the place and he told me I needed to cut off my real nails and only use fake ones! I said my real nails were just fine . . . that he did a lousy job painting them. My nails grow super fast and unfortunately, I hardly ever paint them anymore.

Sorry to hear about your neighbor's daughter. We will keep them in our prayers.

Hope you are having a better week. Yes we definitely need to go shopping. I can show you where all the good Targets are in Vegas.

I left you a little something on my blog. Hope you enjoy it.

Mine aren't real, and you know what they look fabulous. In fact, just yesterday a friend of mine felt them and said how real they felt and looked!

I am so sorry about the rough week. My heart goes out to her family. Hugs