Does anyone else have leftover goodies from Halloween? Notice there's never any leftover chocolate? I only have one official Trick-or-Treater now. This is Mimi the Diva. In other words she dressed as herself this year. It's all about me, me, me! It's hard being the baby of the family. 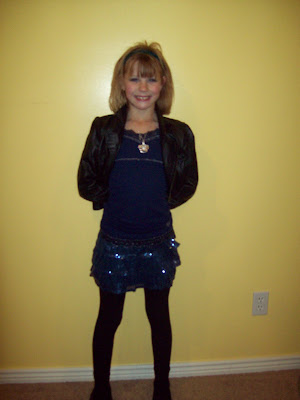 We had a little party at Randy and Kari's house. I loved the metallic bronze eyelashes that were discarded halfway through the night. I'm sure the reflected light had something to do with that. And, yes, they are as fun as they look. 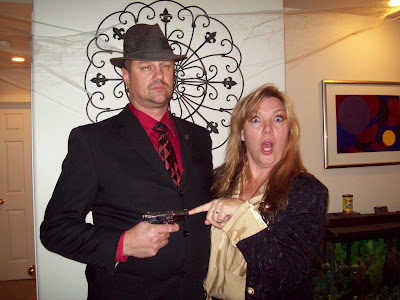 We laughed and laughed and laughed. We laughed so hard our cheeks hurt, our sides hurt, our heads hurt, we were coughing, sputtering, hooting, howling, crying, snorting, breaking chairs, nearly wetting ourselves, and almost passing out from the lack of oxygen! Our kids were begging us to stop! And that, folks, is not an exaggeration. We were drunk on laughter. This is Ricky and Dianne. 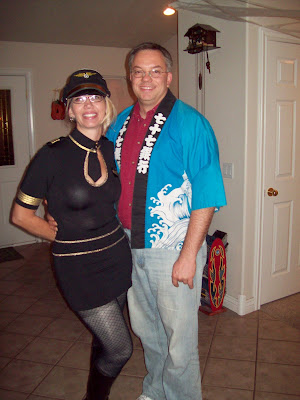 This is me and my dear husband, Jared, smiling like the Cheshire Cat. I also dressed as myself this year. I already have next year's costumes planned. 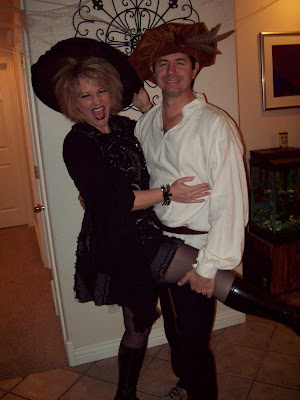 The kids need leftover candy so we can steal it to give us energy for the Christmas shopping the next day. Did you hear they were trying to change Black Friday? (Linked up for my foreign friends that might not know what that is, since you totally miss out on Thanksgiving altogether.) I don't shop early on Black Friday. I don't like to see the ugly side of people. I think it's a taste of what it will be like when/if we have a world economic collapse.
So....coming up - my daughter Ali is performing in her high school musical - Opening Night Tuesday night, Nov 16th. She is Sandy in "Grease". It was meant to be her part - she was BORN in Australia, you know! She was speaking Australian up until she was three and a half. Seth spoke with an accent until he was about six. People would ask him how old he was and he would answer, "Fahv and a Hawf." I'll try to post some more in the next few days. Lots happening!
Posted by Krista at 10:25 PM

Labels: Ali, friends, fun, holidays, It's all about Mimi, Jared

You look hot!! I wish I had leftover candy.

No candy here!! You do look great. You guys are always having fun and are fun to be with.

Glad you're back, I've missed ya!

Ok so I totally love your outfit, you do look hot!! No wonder your husband has the 'smile' Yep, he's thinking, "Ya baby!"

Your daughter is so cute, gotta love her personality!!

She's adorable and it looks like you all had a great time PARTYING!! ;D

Hmmm... we have some of the WEIRD flavored tootsie rolls left... Just looked in the drawer where hubby hides candy and there are ROCK HARD marshmallow chicks from EASTER!! I think it's safe to TOSS them NOW!! BLEH!!

I think Seth should keep the accent!! Girls LOVE a man with an ACCENT!! Oh yeah!! YOU already KNEW that! (((HUGS)))

Aw, I've got leftover chocolate, but only because I hid it and put it 'way up high so I have to drag a ladder to get it. (hope hubby doesn't read this). You look like you had SO MUCH FUN! It's great to have friends like that. Way to go all of you!

Your diva looks beeyoootiful. Post pics of your "Sandy" soon.

our HS show opens Thursday... the Teen actually CUT HIS HAIR for the part!?!

I think there IS leftover candy somewhere... but the kids have been hiding it very well... they've learned from years past!

All we have left is a bunch of Tootsie Rolls. And they are probably hard by now.

Great costumes. And there's nothing like a great laugh.

Diva Mimi and laughing till you almost puke? Sounds like a fantastic holiday to me. Now get better in time for Thanksgiving gorging, my dear. (I hope you and Jared got a little 'suh-m suh-m' going on while you were all witchy and such. You looked like Sarah Jessica Parker on that Halloween show where she's the hot witch.)

Welcome to the Garden of Egan said...

You sorta look like a hooker.
It's a good look for you.

Seriously, Tauna? I was thinking about a change in careers, but nothing close to the oldest profession in history. Hmm, I think pros make more than I do.

I do not even know how I ended up here, but I thought this post was good.
I don't know who you are but certainly you're going to
a famous blogger if you are not already ;) Cheers!