I went downstairs to the basement to find some ribbon for my newly purchased Christmas presents when I saw a sight so shocking - so horrible I didn't know what to even do. I was on the phone with my BFF, Karen, when I described the gruesome scene:

Little pieces of wood and sheetrock left the telltale signs. Watercolors, paintbrushes, glitter, glue, ribbon, pom poms. I know the basement looks like a construction zone anyway, because there is some construction going on. I had visions of - no, not sugarplums - vacuums, sponges, weeping and wailing. Karen laughed a little too hard but I understood. It was her turn to laugh, afterall. It's usually her kids playing with the liquid pump soap in the sink, or the toothpaste or the toilet paper. My youngest is a year older than her oldest, so I thought I was done with all the disasterous stuff.

I decided to play a little trick on Mimi (age 9). I went upstairs and said (while Karen was on the phone), "Can you believe what Seth (age 19) has done? He has been making a mess with paint and sheetrock and wood downstairs. He even made a heart out of sheetrock and glitter and pom poms."

"Yes, Seth. He left a big mess downstairs - it's everywhere!" I answered.

"It's your mess?" I'm trying to stay straight-faced and Karen is not helping.

Mimi's eyes start watering, "It's mine! You probably saw your Christmas present!"

Okay, now I feel kinda bad. Amazing how she glued two pieces of rectangle sheet rock together to make a heart, covered in glitter and pom poms!

I went to lunch with my friend Princess Na'alie (that's Natalie with a Cockney accent) a couple weeks ago and told her all about the wallet my Mimi made for our neighbor who used to be her teacher at church. It was made of silver duct tape. I told Na'alie I was trying to talk Mimi out of giving it to her, but never mentioned the words "she's going to think we're rednecks." Mimi thought it was so beautiful, being silver with hearts drawn on it and had her name "Lori" written on it. I got a sweet message on Facebook saying she loved the wallet and loved Mimi. It was truly a gift from Mimi's little heart. Na'alie wants one now.

I'm adding some pictures in case you want to place your orders. 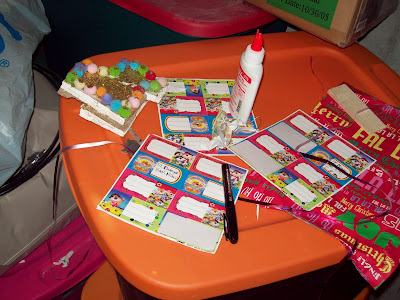 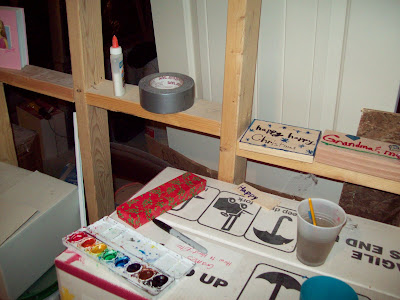 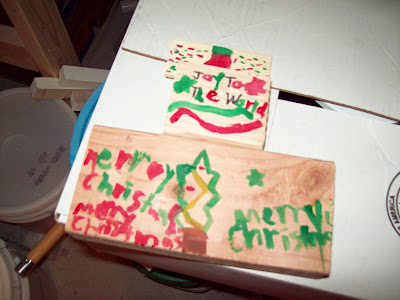 We are back ordered on duct tape wallets at this time.
Posted by Krista at 11:21 PM

Labels: It's all about Mimi

That is so sweet! Mimi's a keeper!

That is so sweet! I get a few of these creations from Nina.
xx

I love that she's set up her own little creative office. She'll probably be a designer one day, and you'll either be the reason she's a success...or in therapy. :) Darling.

I would be stressing about the mess too and then feel totally guilty when I found out it was for me - too precious!

I remember a little girl who, about 35 years ago, made her Daddy a pencil holder from a juice can which was covered in masking tape colored different shades of brown to resemble leather. I still have that pencil holder... and ALWAYS WILL.
Apparently Mimi comes by her talent - and her love of giving from the heart - honestly!

Gil, you hit it on the head! Mimi is so creative! Just like her mom. She's got a heart of gold!

I so love your Mimi. She really does have one of the sweetest little spirits I know.